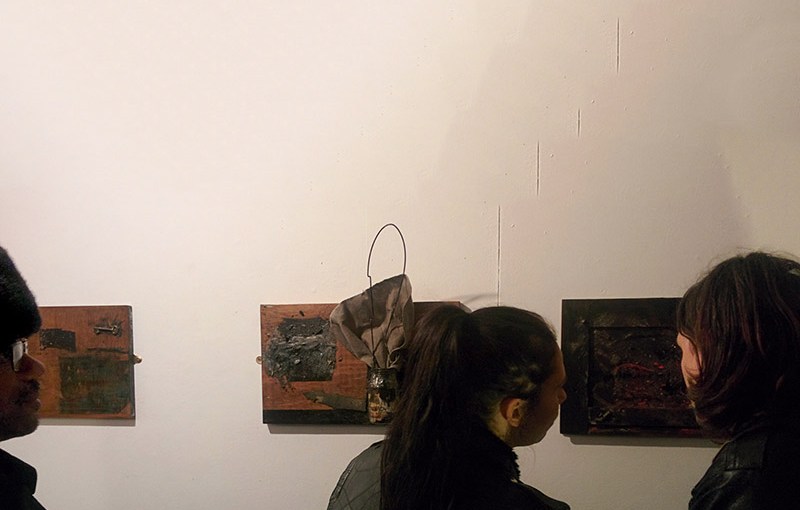 Ken Flaherty’s Doomed Gallery in East London has a rapid turn-around of exhibitions of provocative new work. Thursday last week opened a show of “six new and emerging artists from across two of the UK’s most vibrant and cultural cities”, namely London and Leeds. One artist whose work really grabbed my attention was Dan Beesley. His mixed-media works hit me with a surge of wildly Dionysian energy. 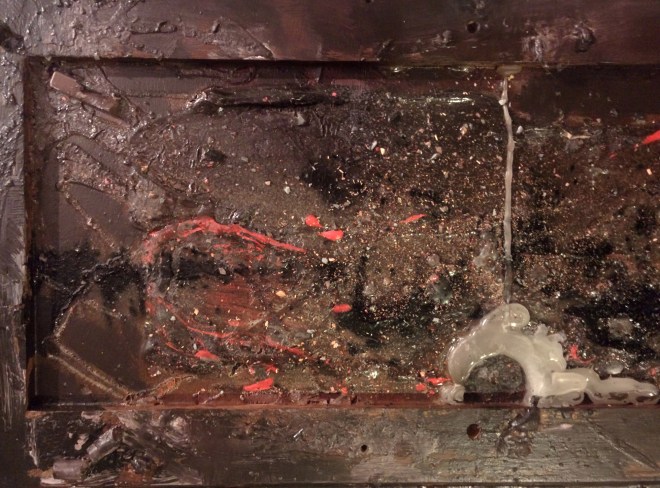 Beesley’s work is situated outside of any obvious genres, but has pointers to Marcel Duchamp and Max Ernst. Duchamp’s ‘ready-mades’ were found objects that he put forward from 1915 onwards, culminating in his infamous urinal (Fountain, 1917), and were supposed to be an interrogation of the very idea of man-made art, which Duchamp regarded as “unnecessary”. It was, however, an intellectually bankrupt move by Duchamp since it told us nothing and went nowhere. Only when the found object is subject to intervention do we encounter the interesting process that we call ‘art’. Beesley displays chunks of furniture from his studio that have subtle and ambiguous interventions. In fact, the naturalistic chaos of the works makes it largely impossible to tell where the found object ends and the intervention begins. And in this respect he reminds me of Ernst, who would begin a picture with the naturalistic chaos of dripping paint, or frottage and grattage, and tease an image out of it. Beesley resists the temptation to follow Ernst and make order out of chaos, and leaves us to confront natural mess unfettered by reason. 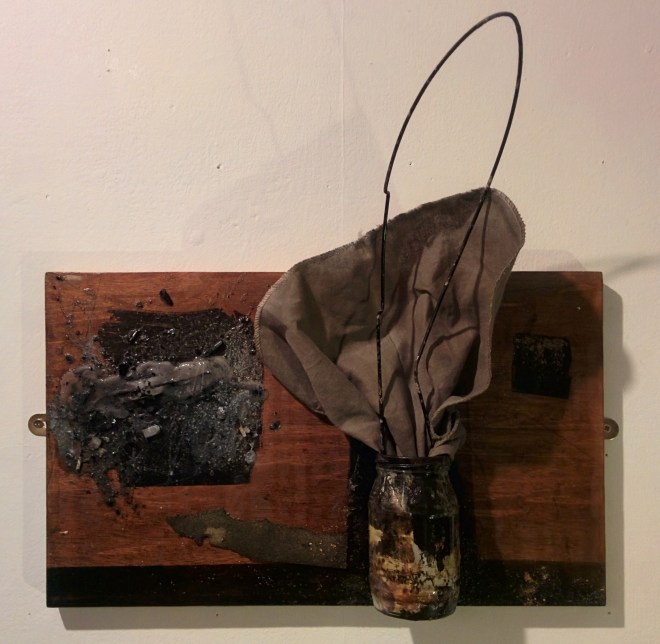 Daubs of paint, drips of candle wax and a felled candle, a key imprisoned by some glue-like substance, stencilled geometric forms, … the irresistible beauty of natural disorder. It was the Romantic era that formally recognised that the ruins of a castle have a greater aesthetic appeal than an intact one: naturalistic chaos is neither pure chaos, like Jackson Pollock’s meaninglessly random drip paintings, but neither is it the deliberate product of a thinking mind. It is a work that dances on the edge of chaos but withstands the vertiginous pull of the abyss. 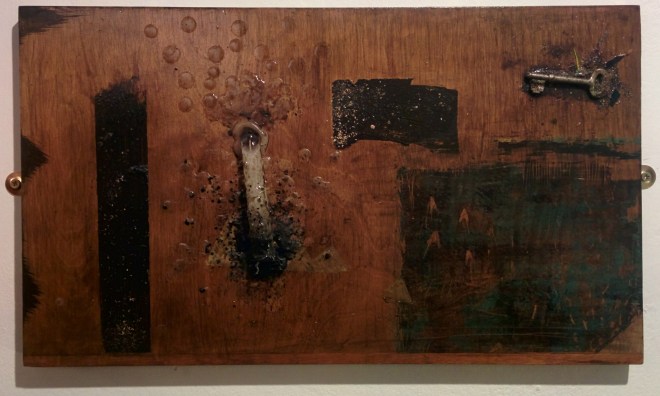 Beesley studied Fine Art at Leeds College of Art and Design. He is now based in Leeds and works across multiple disciplines. Several of his earlier works on paper can be seen on his Tumblr portfolio, danteonline.tumblr.com. These are interesting but not match the power and authenticity of new mixed-media pieces shown in the No Frills show at Doomed. 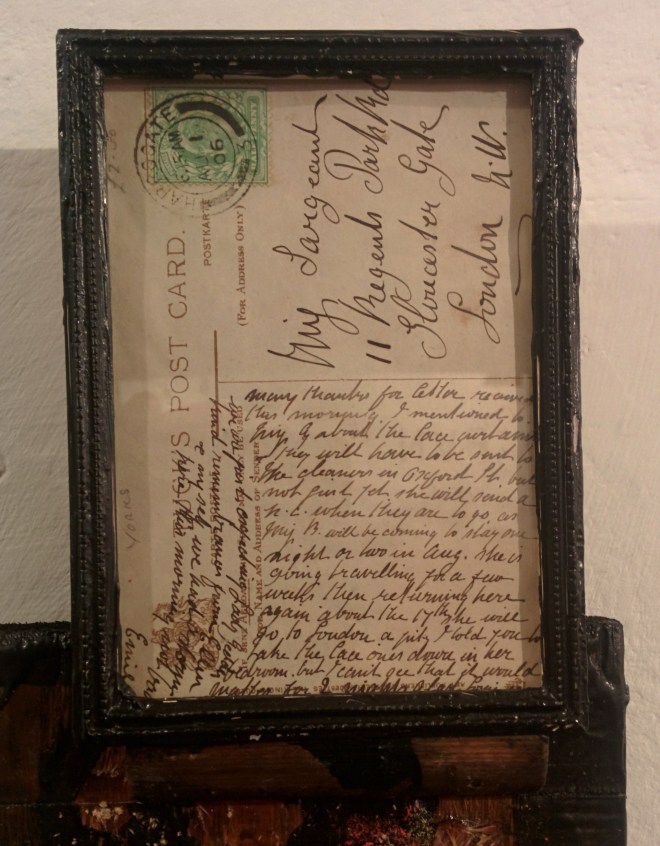 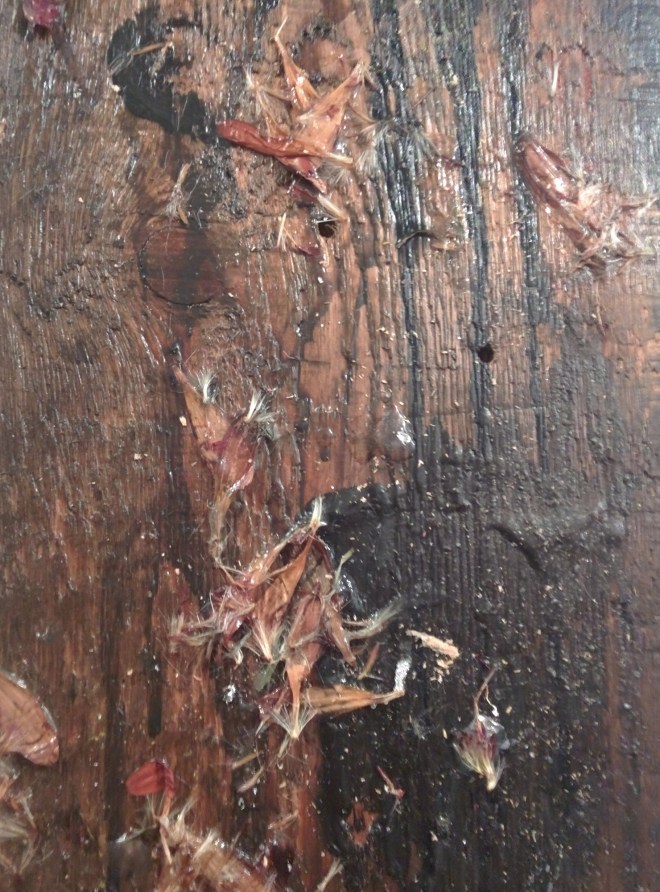 Above: The Sentinel Gallery, Wivenhoe, from the gallery web site.

Open Exhibitions are great for artists who are not yet ‘established’ as they allow individual works of merit to reach public attention (and, with luck, to be bought). Established artists, of course, can also use Open Exhibitions to enlarge their audience. But it is the new artists who stands to gain most. Many (but by no means all) of the artists in this Staying With Art group are not so established that they have an arrangement with a gallery for regular exhibitions of their work.

The Sentinel Gallery is a new but highly regarded gallery in Wivenhoe, Essex. This is a small fishing town, about an hour outside London, with an unusually high concentration of artists, writers, and other creatives. The Gallery was created a year ago by Pru Green, a potter who previously set up the Gwili Pottery in Carmarthen. It was an uphill struggle to create this strikingly modernist purpose-built gallery space in the old part of Wivenhoe. (And ‘old’ here means very old. The nearby house I am living in dates back to the Sixteenth Century.) Designed by architects Laurie Wood & Associates, the Sentinel Gallery demonstrates modernist design at its best. A human-scaled building that nestles unobtrusively between trees and existing buildings, it adds value to its environment. The fact that it is not on the High Street, but is in a quiet lane alongside the railway, has probably helped it win acceptance in the local community.

To celebrate its first birthday, Sentinel is holding an Open Exhibition entitled Select, and had its vernissage yesterday. By midday people were queueing to get in, and the gallery was packed with art-lovers shuffling around the hundred or so works in the Open Exhibition.

Given the nature of the exhibition, it is not surprising that there was a wide range of styles and subject matters. Nevertheless, there seemed to be two recurring themes: the countryside, and abstraction. The majority were paintings, with a minority of photographs and sculpture. One picture that stood out was a photograph of Walton Pier, in Walton-on-the-Naze, about fifteen miles from Wivenhoe, by Reka Komoli (who is the photographer on the Staying With Art project).  To allow room for anglers, the pier broadens out at its end, and the wooden floorboards form a beautiful pattern of organic geometry, and this was Reka’s subject, a picture entitled The Geometry of Fishing.

One of the regulars at the Sentinel Gallery is Jill Desborough. I love her dark pictures that depict a strange other world. This time she had two sculptures. One was a minotaur, apparently sunk in existential angst, entitled Solitary.

Jill’s other piece here was her playfully black sculpture of two rodents, The Lovely Rats III.

It was hard to appreciate fully the works on display, of which there were about a hundred, without elbowing aside other art-lovers to claim some floor-space in which to stand back and take it all in. There were several pieces that really struck me as interesting, and we will be going back on a quieter day to peruse the show.

Meanwhile, if you are anywhere near Wivenhoe – the nearest big town is Colchester, and London is barely an hour on a direct train route – then you really should visit the Sentinel Gallery. The web site is www.thesentinelgallery.co.uk and they also have a Facebook site.