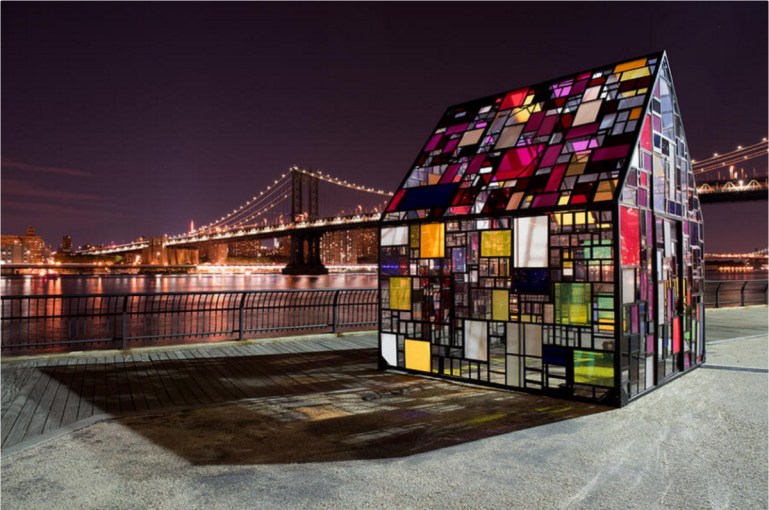 Above: A beautiful stained-glass house by Tom Fruin in the Dumbo area of Brooklyn, with Manhattan Bridge in the background (Kolonihavehus, 2010). It represents the kaleidoscope of ‘arts’ to be found in Staying with Art. Photo © 2015, Reka Komoli.

What is staying With Art?

Staying With Art is a project to bring together AirBnB hosts who are artists, writers, or performers.

People who follow an artistic discipline often have to face a dilemma – to sacrifice art to get a day-job and earn a decent wage, or sacrifice home comforts to dedicate time to art. It’s great if you can get a job in the arts that pays you enough to live on, but many people in artistic fields have to muddle through with a mixture of causal jobs, artistic gigs, and doing without. AirBnB enables some people in this situation to add another source of income to the portfolio without having to sacrifice huge chunks of creative time.

History of this group

At the end of 2013 I set up a Group in AirBnB called Artists, Writers, and Performers. My idea was to provide a forum for prospective guests to find hosts who are active in one or another artistic field, and for hosts themselves to network with each other. At the time, I was a writer depending on AirBnB for my survival, and I thought it might be nice to reach out to others in a similar situation. I expected that there might be, say, twenty-four other people who would join. I certainly did not expect twenty-four thousand to join, which is what happened!

Unfortunately, the web software provided by AirBnB for the Groups was inadequate for such large groups. Both the discussion page and the list of members were so long, it was impossible to scroll to the bottom; and the rudimentary search function stopped working; and there was never a function for searching by geography or by art. So, Reka Komoli and I set up a prototype of some web software that would solve these problems. The problem then was to get the thousands of AirBnB hosts in the Group into the new system. I asked members to send me their details, and about a thousand did, but often incompletely, and then we faced the task of manually entering the details, and the whole process ground to a halt as other pressures on time made it impossible to spend hours every day transcribing host details.

But now … AirBnB have announced that they will shut down and delete all Groups on February 25, 2016. I think the Artists, Writers, and Performers Group is too good to discard, so I am prompted to action …

The birth of ‘Staying With Art’

Who is this for?

This is only for AirBnB hosts who are sharing their main homes with guests. It is not for businesses who are running large numbers of separate properties. And it is only for hosts who actively pursue an artistic field in a fairly serious way. Hanging a few pictures on the wall doesn’t count; but running a public gallery while hosting on AirBnB is what we are interested in. Both professionals and serious amateurs are welcome, but doing a few doodles on the weekend does not cut the mustard. Anything that would normally be classed as ‘artistic’ is good: oil painting, writing short stories, ballet, burlesque, bodypainting, acting, poetry, murals, performance art, running an art gallery or theatre space … It does not include cooking, hairdressing, decorating, or living within a few miles of a museum.

Lots of people have tried to join the group who happen to live in a nice place and think it would be relaxing and inspiring for creative people. Sorry, that doesn’t count: the group is for hosts who are themselves artistically creative. Sorry if this seems hard. I have had to delete several really lovely hosts in gorgeous homes because they just don’t meet the simple criteria above. (Hey, you can always start your own group …!)

I plan to visit  members of the group and post reviews of their artistic work in the blog. (This is not a review of the accommodation, which is AirBnB’s prerogative, just the artistic work.) Reka is a professional photographer and will be coming with me to take pictures. These will be hosts I can easily reach, starting with London, including a short visit to Paris soon, and a longer visit to New York in April, and other places as we travel around.) (FYI Some of my earlier, non-AirBnB art reviews: Mr Smith, Angelo Musco, Compagnie Carbabosse, Anne-Francoise Couloumy, Alban, Light Attendance.)

As I cannot visit all 24,000 members, I will be welcoming proposals from any published writers in the group who want to do some reviews to be posted here on the blog.

18 thoughts on “Welcome to Staying With Art”